keeping fitness fun: an interview with adam mussell of the benny bridge crew

category.
Running
for the community
for athletes 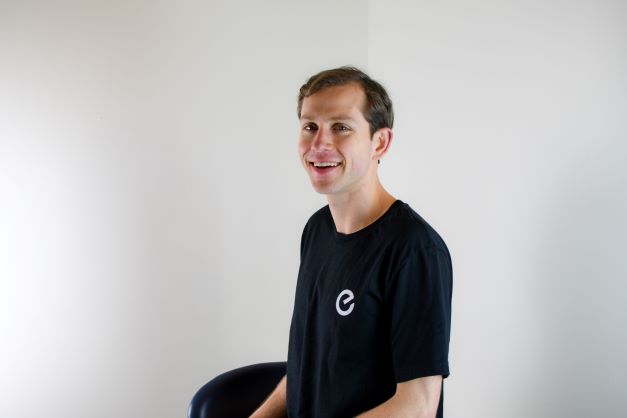 Adam Mussell is a lifelong athlete and the unofficial leader of the Benny Bridge Crew, a running group in Philly. Ian Campbell is a fitness enthusiast and the founder of the sports app, eseo (every sport for everyone). Read to learn what Adam shared on all things community sports and outdoor workout groups.

Were you always involved in sports? How’d you become so active?

I played sports throughout my standard suburban American kid phase of life. Soccer was the first organized sport I played. Basketball soon followed because I was always the tallest kid. As I got older, I played whatever sport I felt like at the time, like baseball or rowing.

I got a back injury from rowing midway through college. After college, I moved abroad, then came back and moved to Philly. That was over a decade ago. At that point, I wanted to play organized sports again and thought soccer was my best choice. I got into a few leagues in Philly through Heyday Athletics and CASA. I was always a goalie. I also tried to keep up with basketball, you know, through pick-up games and shooting around at neighborhood courts.

Now I still play soccer weekly. I run and enjoy basketball though haven’t played on a team in years. I’m learning how to play volleyball, which I’m starting to get the hang of, but learning anything in your (late) 30s takes time.

How’d you get into running?

I started running 2-3 years after moving to Philly. My friend, Ryan Callahan (who help start The Philly 10k) has been a runner for a long time. He got me interested in running, and so did a former Penn coworker. Running with them led me to NP (November Project), which— although not running-focused— was outdoorsy and full of like-minded people who loved being active in varied ways.

When did the Benny Bridge Crew start?

About seven years ago, before the group was official, there were other people already running the bridge together in the early morning. I heard about it and eventually joined up with them. A lot of people at the time were former college athletes looking to stay in shape or get back into shape.

There wasn’t any real promotion, they’d just tell people who they thought would like it. It grew naturally from there. It was pretty consistent (usually about five to ten people) for the first year. At some point after that, I looked around and realized I had been the most consistent person for a while and decided to start an Instagram to loosely “formalize” what we were already doing.

What stands out about the Benny Bridge runs?

It’s a lot of fun considering how hard running a 3-mile bridge should be. Overall, it’s a beautiful run because of the setting and time of day. A lot of people who join for the first time end up saying, “Wow, that was amazing. I really enjoyed that more than I thought I would.”

I also think it’s nice that we keep things light. We always do funny poses for a photo at the midpoint. We’re all just there to enjoy the run, which helps because you know, any good workout is tough. Or at least, you make it as tough as you want it to be. But the group never takes themselves too seriously or leaves anyone behind.

You get to meet a lot of runners that you probably wouldn't have met any other way. It’s open and available to as many people as possible.

We also like to stay and head for coffee afterward. It’s a pretty grassroots group. The leadership is decentralized - the show goes on even if I’m not there. The people who are really interested in it make the experience better for everyone.

Where can people connect with you or get involved with these fun outdoor workout groups?

If you’re in Philly, come check out Citywide Athletics, a pop-up bodyweight fitness group organized by Kate Whittington where members take turns leading workouts every Thursday morning. Locations rotate every week and are chosen by the workout leader, which we announce on our Instagram story

It’s unique because people will take a sport they loved in college or high school and create a workout tailored to it. It’s always outdoors and free. We just did a basketball workout, a volleyball-themed workout, yoga, and a dance workout. People just want to have fun, be outside, and be active, which is what it’s all about.

You can also meet up with us for the Benny Bridge Crew run every Monday morning at 6:05 am on the east side of City Hall.